Spencer Aronfeld and the experienced lawyers and staff at Aronfeld Trial Lawyers have proudly provided legal representation to residents, business owners and workers in Opa-Locka, Florida since 1991.

Opa-Locka was founded by aviation pioneer, Glenn Curtis, in 1926 and was developed by utilizing a Moorish Architectural theme (believed to stem from the traditional Islamic/Arabic epic “One thousand and one nights”). For those who are not familiar with the Moors, they were medieval Muslim 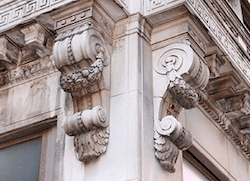 Moorish architecture has several characteristics that distinguish it from other cultures and time periods including Muquarnas, which are structural components (usually made from stone wood, and/or metal) that are mounted on walls (sticking out from a building) to carry a superincumbent weight. In other words, these “Corbels”, usually have something lying on top of them or are holding another structure up—serving the function of a bracket. Here is an example of a traditional style “corbel”:

Despite its relatively small size, having an area of 4.2 square miles, Opa-Locka is recognized as having the largest collection of Moorish Revival architecture in the Western Hemisphere. Conversely, the city’s name, Opa-Locka, is believed to come from a Seminole—not, in fact, deriving from Moorish influences—dialects probably meaning “Wooded Hammock hanging in the swamp”.

The City of Opa-Locka continued to grow until a hurricane in 1926 badly damaged the city and brought development to a complete halt. Thankfully, many of the Moor-influenced buildings still remain and have, since then, been recognized by the Miami-Dade National Register for Historic Places as a part of the Opa-Locka Thematic Resource Area. In addition to their unique architectural landscape, Opa-Locka has a wide variety of transportation services in close proximity—A general Aviation Airport and Florida Tri-rail Station—as well as being used as the backdrop for such successful motion pictures as Bad Boyz II, starring Will Smith and Martin Lawrence, and 2Fast 2 Furious, starring Vin Diesel and Paul Walker.

Although Opa-Locka’s architectural opulence plays a role in attracting future residents to move to the area it seems to have a surprisingly high crime rate. In 2004, Gus Garica-Roberts wrote in his article, entitled “the Curse”, published in February 2009, Opa-Locka had the highest rate of violent crimes for any city (per capita) in the continental United States. In recent years (as recent as 2013), Opa-Locka’s crime statistics report that the city expects a general decline in violent crime and remain somewhat optimistic. Yet, despite these continuing bouts of optimism, the South Florida media continues to harbor negative association to this once popular cultural and religious area (It has been reported that Opa-Locka may have more than 30 churches within the city limits), labeling it as “Crime Plagued” and “deeply troubled”.

These alarming statements about high rates of crime coupled with the fact that Opa-Locka is situated in one of the most dangerous county’s to drive in the State of Florida (Miami-Dade—recording over 40,000 traffic accidents in 2011), do not, unfortunately, help their struggle to overcome past societal stigmas.

Keeping this in mind, it is important to act promptly if you or anyone you know has been injured in a car, truck, motorcycle, bicycle or pedestrian traffic accident in Opa-Locka and do not hesitate to contact the attorneys at Aronfeld Trial Lawyers. The Aronfeld Trial Lawyers is a full service personal injury law firm and we take supreme pride in providing excellent care to our clientele and treating each client with respect and dignity. Aronfeld Trial Lawyers is a family oriented, owned and operated team of lawyers and we are especially passionate in representing injured children.

On behalf of Aronfeld Trial Lawyers, it would be a privilege to represent you in your time of need. Please do not hesitate to call us (toll free) for a free initial consultation or if you have any questions.