Assaulted on a Cruise Ship: Is The Cruise Line to Blame? 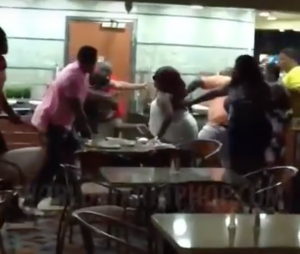 Assaulted on a Cruise Ship

Can a cruise line be legally responsible for an injury that occurs when one passenger attacks another? As crazy as it seems, the same kinds of brawls that occur in bars across the world can also happen on cruise ships. Passengers who simply drink too much—especially those who partake in the “all-you-can-drink” pre-paid drink plans hawked by the likes of Carnival, Royal Caribbean, and Norwegian—can also find themselves confronted by another intoxicated passenger who simply had one or two too many.

And don’t think these incidents are limited to drunk passengers who get into arguments over who-knows-what. A near-riot broke out recently in the buffet line on Carnival’s Glory, where several adult passengers appeared to be ready to rumble over some perceived slight. According to Cruiser’s Choice, this incident marks the third cruise-ship fight in the last 16 days.

Which Party is at fault?

But how is this the cruise line’s fault? Often it is not. The truth is that people seem to forget—or want to forget because they are on vacation—that they are sharing very close quarters with 5,000-6,000 complete strangers. I have often compared a cruise ship to a floating city and have encouraged people not to let their hair or guard down completely. Be mindful and attentive to your whereabouts and surroundings as though you were sitting down for a meal or drink in Times Square or on the Vegas Strip.

Under federal maritime law, cruise lines have a legal obligation to provide reasonably safe conditions under the circumstances. Of course, we argue that the circumstances change when you offer all-you-can-consume alcoholic drinks and food to a bunch of sunburned vacationers who are determined to let loose and cruise like a Norwegian.

When we investigate a potential claim of a passenger’s being attacked by another passenger, we want to know how long the incident took to escalate and whether or not the cruise line had an adequate amount of time to intervene and prevent the injury. When an altercation is sudden, with no chance to controlling it, the cruise line will defend itself, arguing that they did not have notice or a chance to do anything.

However, if a passenger has been harassing another passenger over the course of minutes or hours, and the cruise line is advised, it has an obligation to step in and prevent harm. Cruise ships have a task force of security officers. Often these crew members have police and military experience and know how to detain and control an unruly passenger before real harm can occur.

In this video taken onboard a Norwegian Cruise Ship, you can see a long, drawn-out, and aggressive discussion transpiring between two passengers, with an NCL crew member smack in the middle. Arguably, he could and should have done more to prevent the escalation, which resulted in one passenger’s striking the other. The sole crew member present, who appears to be a barman, should have been provided back-up, as he too could have been seriously injured. Breaking up a bar fight is similar to trying to break up two dogs that are attacking each other; often the intermediary is the most seriously injured.

Modern cruise ships are equipped with fully functioning jail cells, called brigs. They are used to detain unruly passengers, who are often disembarked at the next port and arrested. Cruise lines can also detain passengers in their own cabins—under a sort of house arrest—until law enforcement officials get involved, usually the FBI.

If you have been the innocent victim of an assault on a cruise ship by another passenger or a crew member, you may be entitled to compensation for your medical expenses, lost wages, loss of enjoyment of cruise, and pain and suffering. Our maritime accident lawyers have successfully sued the major cruise lines on behalf of people from around the world. Call us today and speak to an experienced cruise ship assault attorney for a free initial consultation. We are available toll free at 1-866-597-4529 or 305-441-0440, by email at newcase@aronfeld.com, on SKYPE or FaceTime.

Please keep in mind that the majority of cruise lines require that claims be filed within one year of the date of the incident, in Miami’s federal court, regardless of where in the world the incident occurred. Contact us today. We are ready to help.