As a lawyer who sues cruise lines on behalf of injured passengers, I often must travel to remote and even exotic locations to take depositions of crewmembers and to inspect accident scenes aboard the ships. Last week, for example, I took the deposition of a cruise ship’s nurse and performed an inspection of a shipboard accident scene in Venice, Italy, as well as taking the deposition of a cruise ship doctor in Haifa, Israel. While it sounds exciting, and it is, the travel and logistics can be daunting and exhausting, especially when the opposition, in both of these cases, Norwegian Cruise Lines, is represented by experienced and very well funded defense lawyers. 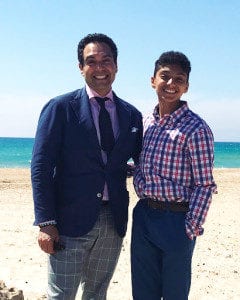 In Israel, we traveled from Tel Aviv’s Ben Gurion Airport to the cruise ship port in Haifa, about a three-hour taxi drive. The deposition took place in the offices of a port agent, with no air conditioning and slow Wi-Fi. Ultimately, the court reporter, who was back in Miami, took the testimony over the phone.  My 14-year-old son Nory, who happened to be on spring break, traveled with me and videotaped the witnesses’ testimony so that we could show it to a judge and jury back in a Miami federal courthouse, where the trial will take place.

The Port of Haifa is Israel’s largest cruise ship terminal and is quite modern despite being a relatively small port compared to Miami. It offers the services one would expect, such as a duty-free shop, currency conversion, and access to 24-hour public transportation including bus, subway, and a railway, which can transport cruise ship passengers to visit Israel’s extraordinary religious and historic sites.

For cruise ship passengers who want to stay near their ship in Haifa, there is plenty to see in and around the port, including the Baha’i World’s Gardens, Mt. Carmel, and world-class beaches and restaurants.  Baha’i World is about 10 minutes from the Port and should not be missed because it is often referred to as the Eighth Wonder of the World, having been declared a World Heritage Site by UNESCO in 2008.

No cruise to Israel would be complete without visiting Jerusalem, Israel’s capital and the birthplace of three religions–Judaism, Christianity, and Islam. Our visits to the historic Old City of Jerusalem are always unforgettable.

Most of the major cruise lines feature itineraries that stop in Israel, including Carnival, Norwegian, Royal Caribbean, Celebrity, Cunard, Princess, Seabourn, Azamara, Crystal, Holland America, Oceania, Regent Seven Seas, Viking Costa, and many more. If you are injured on a Holy Land cruise to or from Israel, while a passenger onboard one of the major cruise lines, claims against the majority of these cruise lines must be filed not in Israel, but in the United States in Federal Court within one year of the date of the incident.  Many of the cruise lines, such as NCL, require that a formal written notice be sent shortly after the accident before a lawsuit can be filed. Most of these claims are litigated in Miami, Florida, near Carnival, Royal Caribbean, and Norwegian corporate offices, regardless of where the incident may have occurred or where the passenger is from.

Cruise lines make it very difficult and expensive for injured passengers to obtain compensation.  A huge body of Federal case law shields them from the kind of civil liability that most corporate defendants would otherwise have to contend with. For example, Federal Maritime Law generally does not permit claims for class actions, emotional distress, or loss of spousal consortium.

Hiring a Lawyer for an Israel Cruise Accident

Because suing cruise lines is both complicated and specialized, we recommend you consult only with an experienced cruise ship accident law firm. Our maritime injury lawyers have successfully sued Carnival, Royal Caribbean, Celebrity, Norwegian and other cruise lines on behalf of people who have suffered slip and falls, trip and falls, sexual assaults, maritime medical malpractice, over service of alcohol, and other serious injuries while on a cruise ship, in port, during an excursion, or on a tender.

We offer free initial consultations to anyone who may have a potential claim via email at newcase@aronfeld.com, telephone at 305-441-0440 or toll free at 1-866-597-4529 or SKYPE. Contact us today and speak with an experienced cruise accident lawyer to let our years of experience and expertise help you obtain compensation for your lost wages, medical expenses, loss of cruise, transportation expense, and pain and suffering.  Call us today–we are ready to help.