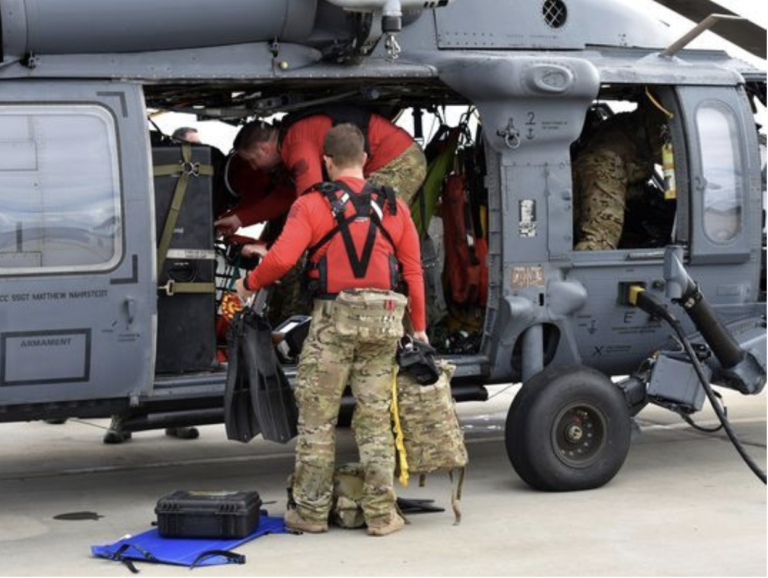 One of the most dangerous situations that an injured or sick cruise ship passenger can encounter while on a cruise- is being too far away from the port when a medical emergency arises. Luckily, for a Royal Caribbean passenger who was suffering from appendicitis 600 miles off the Coast of Cape Canaveral- while aboard the 2,000 passenger Grandeur of the Seas the 920th Rescue Wing of the Air Force Reserve was able to perform an at sea emergency rescue.
An HC-130N King fixed-wing combat rescue aircraft was used rather than a Coast Guard helicopter due to the distance.

According to USA Today, Eight citizen-airmen piloted two HH-60 Pave Hawk helicopters with four elite Guardian Angel active-duty para-rescuers onboard. An hour later, seven more airmen flew an HC-130N King fixed-wing combat rescue aircraft with six more Guardian Angels in tow. After refueling twice in mid-air two the crew arrived at the RCCL cruise ship; where they successfully rescued the passenger. Thanks to these brave people, the ailing man is recovering now at a hospital in Florida.

This scenario could have been far worse. For example, we have represented individuals who had medical needs that the ship’s medical center could not or would not attend to- and as a result in a delay in obtaining appropriate medical care have sustained permanent injuries.
Depending on the nature of the medical emergency, cruise ships can always divert their ships to closer ports and increase speed to arrive sooner. Although, this is rarely done as it can cost a cruise line a lot of money to divert a ship.

This man was indeed very lucky that these individuals came to his rescue.

If you have been injured aboard a cruise ship anywhere in the world, it is important to consult with an experienced cruise ship passenger injury lawyer as soon as possible. Our maritime injury lawyers have over 30 years of combined experience battling the major cruise lines such as Carnival, Royal Caribbean, Celebrity, MSC, Disney, Princess, Holland America, Regent Seven Seas, Oceania, Norwegian and others.

We proudly provide a free initial consultation to anyone who has slipped, tripped and fallen on a wet deck, unmarked threshold, poorly maintained staircase or steep gangway. We have experience in tender boat and excursion accident cases too. We are available to speak with you toll-free 1-866-597-4529, local 305-441-0440 or by email 24/7 at newcase@aronfeld.com. Call us today, we are ready to help.