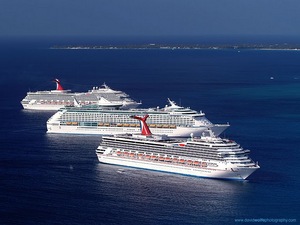 Eight people were injured after a large construction crane smashed into the Royal Caribbean’s Oasis of the Seas Monday as the ship was docked in a shipyard near Freeport in the Bahamas. The ship was undergoing routine maintenance at the time of the incident. Video of the destruction was captured by witnesses and quickly went viral after showing a large crane crashing into the cruise ship was posted Twitter.

The construction crane smashed into the stern of the boat where the ship’s AquaTheatre is located. Because the ship was docked for maintenance, only crew members were on board at the time of the accident. All injuries involved the dock workers who were around the ship at the time. One dock worker reported being so close to the crash that the crane barely missed him.

The Oasis of the Seas is one of the fourth largest cruise ships in the world. The ship is 1,187 feet long, 215 feet wide, and has a gross register tonnage of 225,282. At one point in time, this four-deck luxury ship was the biggest cruise ship in the world, but it was eventually surpassed by sister ships through the Royal Caribbean line, Allure of the Seas, Harmony of the Seas and Symphony of the Seas. The Oasis has the capacity to carry 6,800 passengers and 2,200 crew members. The ship has many different attractions, including a surf simulator, zip line and aqua theater.

Aronfeld Trial Lawyers is a personal injury firm located in Miami, Florida since 1991. We have fought hard to hold cruise lines accountable when they put their profits ahead of passenger safety. We are available 24/7 and encourage you to contact us even if you are still on your cruise. The sooner we can begin our investigation and preservation of key evidence, such as the CCTV footage of your trip and fall, slip and fall, assault or other type of injury the more likely we will be able to understand and prove how the incident occurred. Remember, the cruise lines have the most aggressive and well-funded defense lawyers in the world- protecting their profits. You need an experienced legal advocate in your corner who will fight to obtain the compensation you deserve for lost wages, medical expenses, transportation reimbursement and pain and suffering. Call us today and speak with a cruise ship claims lawyer about your potential claim– toll free 1-866-597-4529, 305-441-0440, or by email. We are ready to help.